Congratulations to Mr. and Mrs. Lynch!

Our old friend Mike Lynch got married last week.   Josh Wilbur, who's out at the Institute for Priestly Formation, gave us the news.  Please join me in wishing all the best to Mr. and Mrs. Lynch! 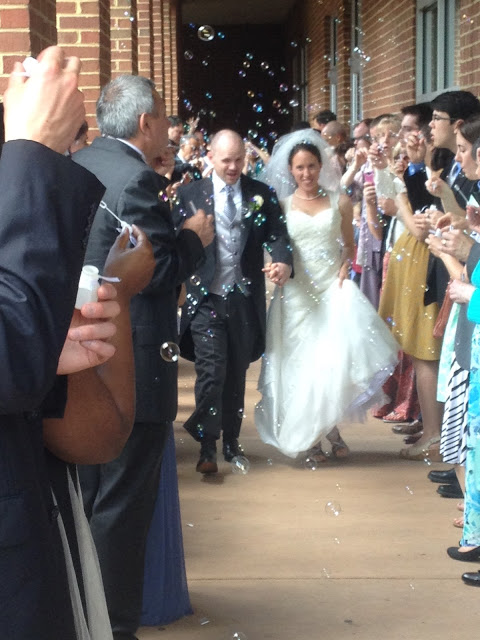 “God calls you to make definitive choices, and he has a plan for each of you: to discover that plan and to respond to your vocation is to move forward toward personal fulfillment. God calls each of us to be holy, to live his life, but he has a particular path for each one of us. Some are called to holiness through family life in the sacrament of Marriage. Today, there are those who say that marriage is out of fashion. Is it out of fashion? In a culture of relativism and the ephemeral, many preach the importance of ‘enjoying’ the moment. They say that it is not worth making a life-long commitment, making a definitive decision, ‘for ever’, because we do not know what tomorrow will bring. I ask you, instead, to be revolutionaries, I ask you to swim against the tide; yes, I am asking you to rebel against this culture that sees everything as temporary and that ultimately believes you are incapable of responsibility, that believes you are incapable of true love. I have confidence in you and I pray for you. Have the courage ‘to swim against the tide’. And also have the courage to be happy.”

And here is an excerpt from the Springfield Ordination:

Kenrick Seminary in Saint Louis is suggesting we observe Father's Day as a weeklong celebration and include all those whom we call "Father."  What a great idea! 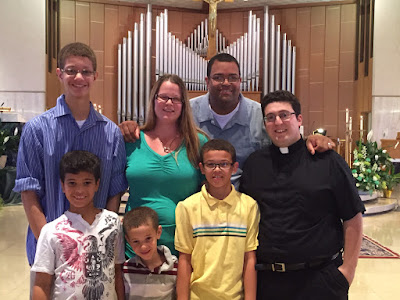 Reports are beginning to come in about our seminarians' adventures.  Matthew Conley spent a week in Youngstown, Ohio visiting his friend Cary Dabney and Cary's wife and four boys Austin, Aiden, Alec, and Aaron. Cary studies at Harvard Divinity School during the academic year and takes classes at St. John's Seminary. Matthew stayed at the rectory of Cary's home parish St. Christine's and was warmly welcomed by Fr. John Keehner pastor, and by Fr. John Ettinger, parochial vicar.
St. Christine's was celebrating their annual parish festival and Matt bravely volunteered to be the victim for the popular dunk tank...many came to "dunk the Bostonian".
Posted by Monsignor James P. Moroney 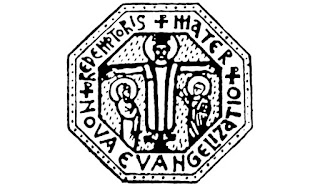 After a bit of ill health, I'm on the road to recovery, as tonight I took part in the Redemptoris Mater Seminary annual Gala, at which it was announced that Cardinal O'Malley has approved the building of an expansion of Redemptoris Mater at its present site in Brookline.  Our congratulations and prayers accompany all our brothers at Redemptoris Mater!

It was a magnificent evening with song, film and the presentation of the Evangelization Award to Dr. Robert George (who gave a stirring keynote) and Mr. John Zofchak, whose acceptance was faith-filled and beautiful. 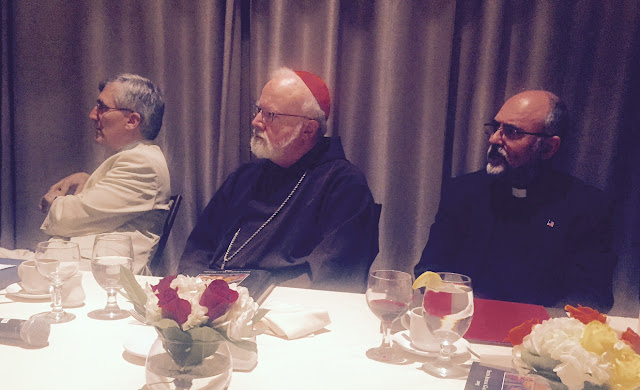 My diocesan brothers and I have just finished three days of Conferences with the National Leadership Roundtable on Church Management.  It is always so good to be home with old friends and fellow priests from the Diocese of Worcester!

The Vox Clara Committee met last week in Rome.  Here's the Press Release we sent out at the conclusion of the meeting.

The Vox Clara Committee met from May 25-26 in Rome. This Committee of senior Bishops from Episcopal Conferences throughout the English-speaking world was formed by the Congregation for Divine Worship and the Discipline of the Sacraments on July 19, 2001 in order to provide advice to the Holy See concerning English-language liturgical books and to strengthen effective cooperation with the Conferences of Bishops in this regard.

The members and staff of the Committee noted with sadness the recent death of Cardinal Francis George, a member of the Committee since its inception.  His Eminence’s important contributions to the work of translation and his deep understanding of the principles upon which the instruction Liturgiam authenticam is based will be sorely missed. As a member of both Vox Clara and ICEL his role was especially significant.

The Committee heard reports on scheduling, future publications and other practical considerations to improve the efficient working of the group.  The members expressed their appreciation for the close collaboration of the Executive Secretaries of the International Commission on English in the Liturgy and the Vox Clara Committee which has greatly facilitated their common work.

Following the conclusion of the meeting, members of  the Vox Clara Committee and the ICEL Executive Committee participated in a joint meeting with the superiors of the Congregation in order to build on this relationship.

The Committee spent the greatest amount of time on a review of the ICEL Green Book of various liturgical texts for the feast of Our Lord Jesus Christ the Eternal High Priest.   A number of suggestions and questions for clarification of this excellent text were submitted to the Congregation.

Finally, the Committee approved a revision of the Ratio Translationis for the Missale Romanum for the English language, having incorporated examples from the recently approved Roman Missal.

On the second morning of the meeting the Committee welcomed Cardinal Robert Sarah, Prefect of the Congregation and Archbishop Arthur Roche, Secretary of the same Congregation.

On behalf of the members, Cardinal Pell welcomed Cardinal Sarah to his first meeting with the Vox Clara Committee.  The Prefect in turn expressed his happiness in meeting with the Committee particularly in light of his recent meeting with Pope Francis.  Cardinal Sarah reported that the Holy Father was quick to state that “Vox Clara must remain because its work is very precious for the English-speaking Conferences in the world  So tell them they must continue the work.”  The Prefect continued that he was “very glad to convey the encouragement of the Holy Father” and that he looked forward to working with the Vox Clara Committee in the years to come.

The next meeting of the Vox Clara Committee is scheduled for January of 2016. 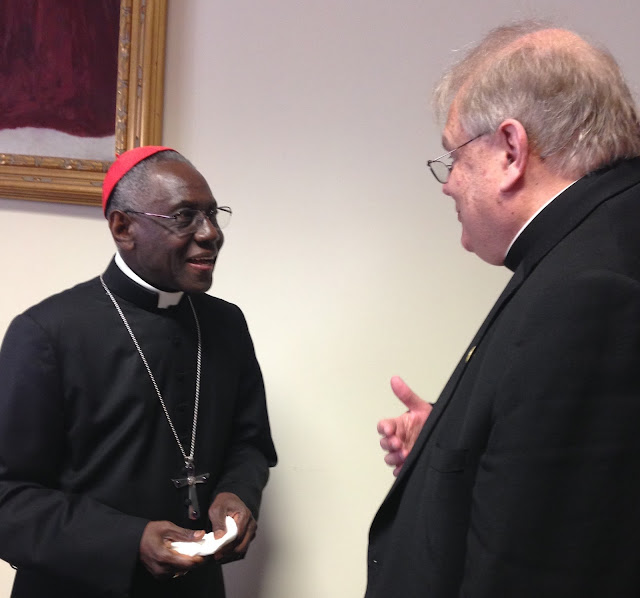 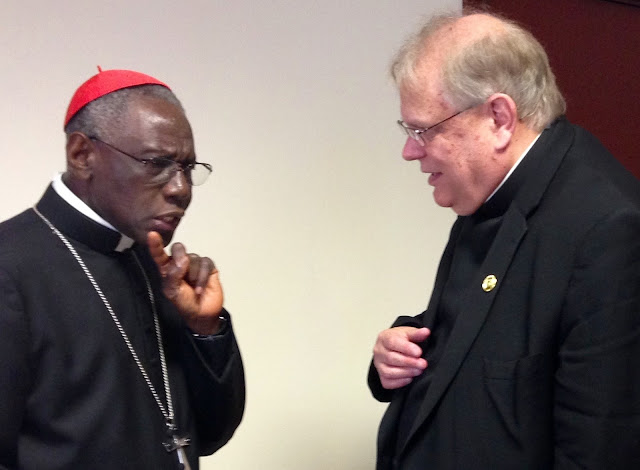 An Anniversary, A Canvas Wrap and A Candidacy 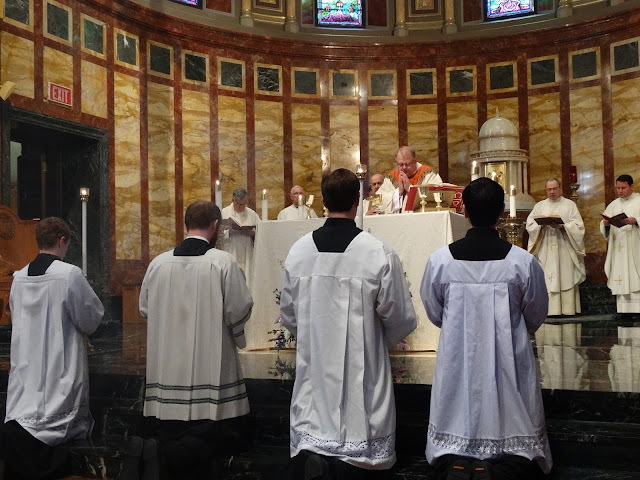 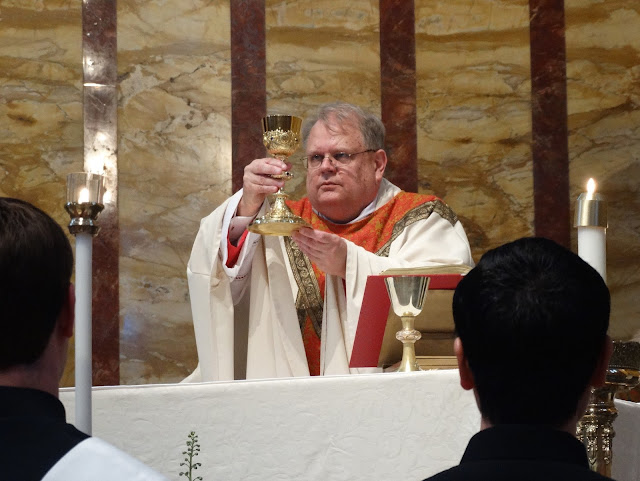 I was honored to celebrate my Thirty-Fifth Anniversary as  priest just a couple weeks before the end of the semester. 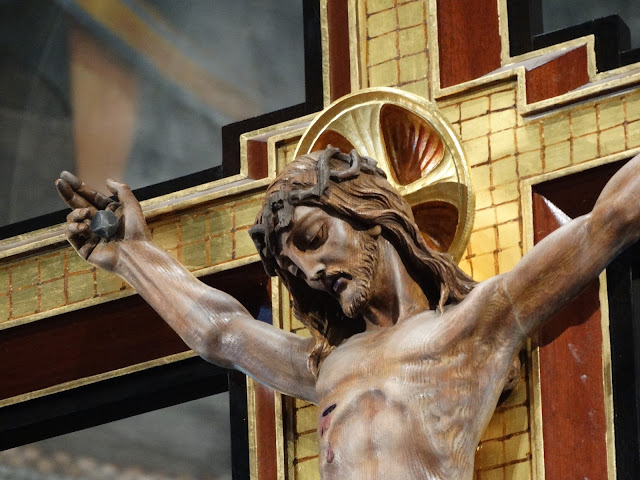 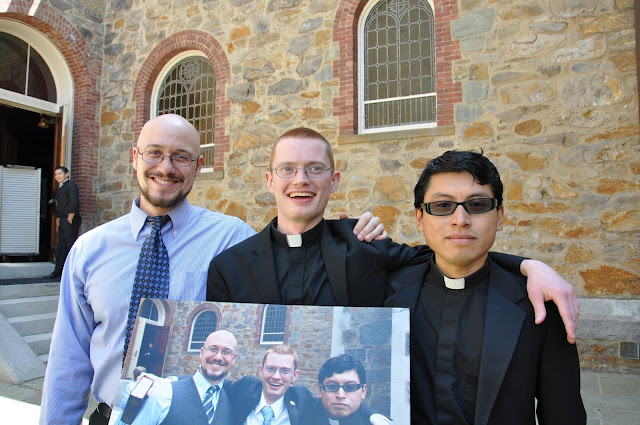 Here's an ingenious take-off from one of our canvas wraps taken at the Closing Picnic
(just before the Eschatological Bocci Tournament!) 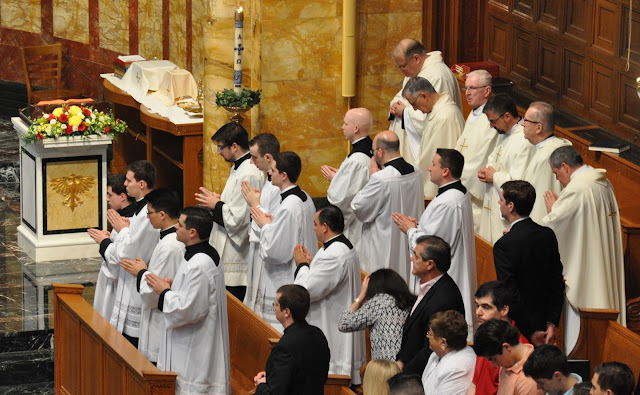 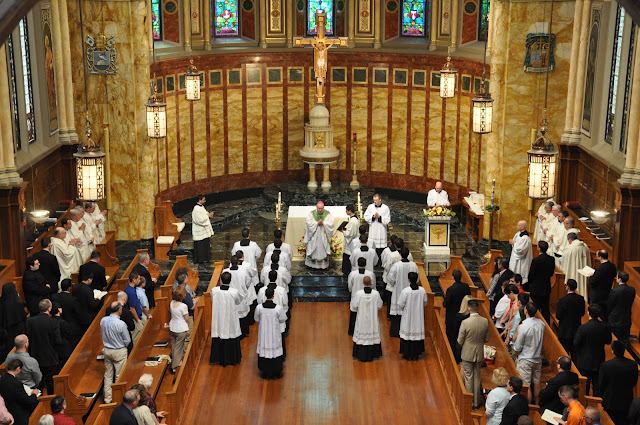 Softball with our Brothers at OLP

I'm a little late in posting the results of the Eschatological Bocci Tournament which ended the spring semester at SJS and marked the beginning of the summer months.  Congratulations to this year's champions: Joseph Kim, Brendan Rowley and Joseph Brice. 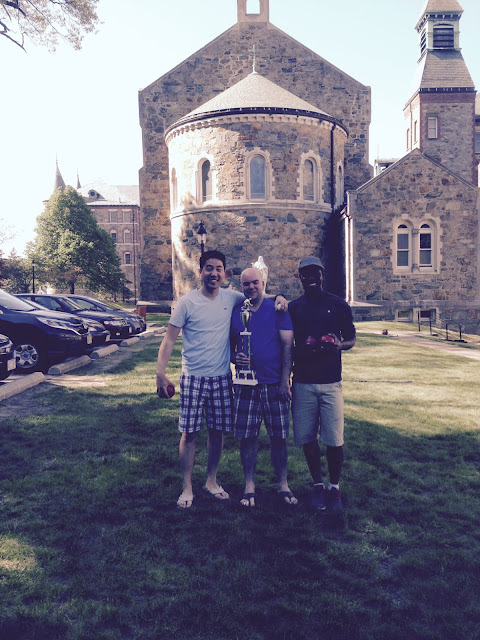 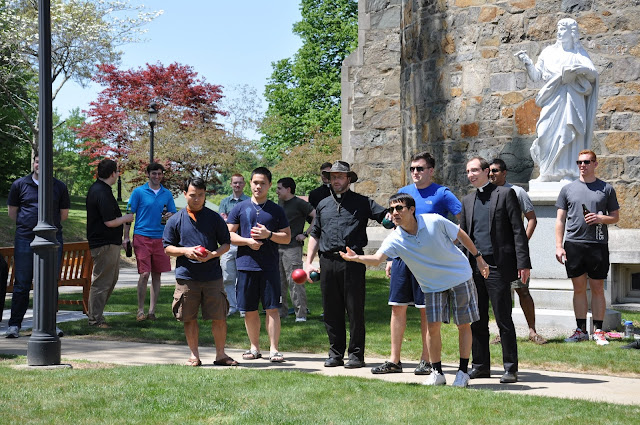