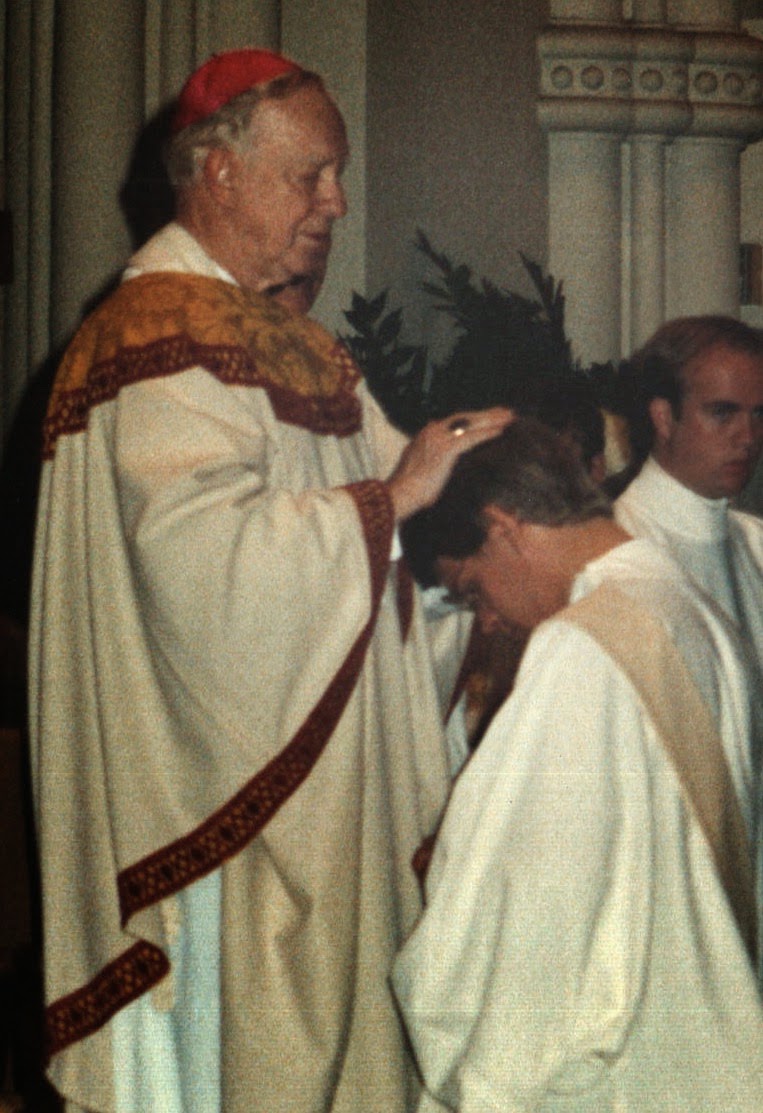 Thirty-five years ago this spring I was ordained a Priest.  I reflected on this anniversary at Mass today.  Here's my homily.

I remember the day I was ordained as if it were yesterday.  And yet it was before most of you were born.  I was a nervous wreck as we walked into the Cathedral Church.  But God knew, and in the first manifestation of his sense of humor turned out all the lights when the procession got half-way down the aisle.  The organ died, the MC got a panicky look on his face and the older priests just smiled knowingly.  And we picked up the song and went on.

A few minutes later I was laying face down on the old yellow carpet as they sang the litany of the saints and, still very nervous, I started to get dizzy, which gave way to panic, until it occurred to me that this was probably the best moment to faint, since I would have the least distance to fall.  At which I laughed to myself and was finally able to relax somewhat and pray.

I have been trying to relax somewhat and pray ever since: to let go of my pre-occupations and plans and just to fall into God’s loving embrace and do the will of his only-begotten Son.

It is a great adventure, and one which for thirty-five years has brought me more joy than I could ever have imagined.  Sadness, sorrow and tears too, but each tear has been but a promise of the joy that awaits on the other side of the Cross.  It’s always been true.

For thirty-five years I have tried to decrease, that he might increase.  Some days, and many of you were there, I did a pretty good job.  And on other days, and you were there too, I really messed it up.

But on each day, I have tried to take up the cross, as best I am able,and to follow him who is alone worth following. And the thing that’s made it easiest, is I have never been alone. You were there, and so were so many others who were so much better at this task than I was.

And Christ was there, as he ever will be, inviting us to die with him,urging us to rise with him,and ever seeking to ignite our hearts with his own unquenchable love.

Christ, our great High Priest who offers the perfect sacrifice from the cross.  Who invites you in this and every Mass to join the pains, the joys, and the sacrifices of your lives with his Paschal sacrifice as a perfect oblation to the Father.  For each act of holiness, each forgiven wrong, each virtuous act and patient moment are mixed with bread and wine and placed upon that altar as Christ placed his body upon the cross.  And the Father receives our sacrifices and transforms our gifts into his own body and blood, which he feeds us that we might continue to offer the sacrifice of praise in each moment and every struggle of our lives.

As I look out at you my brothers and you our guests from parishes I have served, I am reminded that this sense of Priestly ministry is expressed so beautifully in that ancient prayer of ordination prayed over this head so many years ago (when it had so much more hair).  The final words of that prayer describe the work God has given to me and will soon, by his mercy, pass on to so many of you:

And so may the full number of the nations, gathered together in Christ, be transformed into your one people and made perfect in your Kingdom.

All made one in Christ, all made branches joined to the one vine, all grafted onto him and onto one another.  None separated by pettiness or jealousies, resentments or suspicions.  Ut unum sint!  All made one.

And if I’ve learned anything in these years of Priestly ministry, it is that such unity in Christ is not accomplished by sterling sermons or the latest brilliant pastoral initiative.  Such unity is accomplished only by the offering of the Paschal Sacrifice by which Christ grafted us to himself, root to marrow: this holy Eucharist by which we are so healed of our sin, so utterly transformed that it is no longer we, but Christ Jesus in us, ever becoming the Body of Christ, his own Flesh and Blood.  For only thus is “the full number of the nations, gathered together in Christ,


…transformed into [his] people and made perfect in [his] Kingdom.”
Posted by Monsignor James P. Moroney