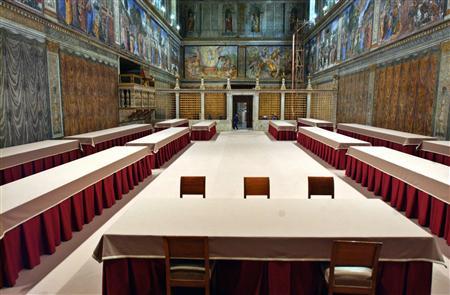 The Sistine Chapel is quiet tonight. The sound of carpenters laying the wooden floor, electricians pulling wires for the electronic jamming devices, and plumbers connecting copper chimneys to the stoves have all grown silent.

All that remains is for one hundred and fifteen Cardinal electors to enter the Chapel and begin their voting. But that won't happen for another thirty hours when the procession winds its way from the Pauline Chapel to Conclave.

At the same time, a blanket of quiet has descended on Castel Gondolpho, the Pope’s summer villa in the Castelli Romani, where Pope-emeritus Benedict XVI waits with the rest of the world, praying for the election of the new Pope.  In his last meeting with the College of Cardinals the day he resigned the Papacy, the Holy Father promised “my unconditional reverence and obedience” to the new Pope.”

Yet even the Pope-emeritus has no more idea than anyone else who the Holy Spirit will choose to succeed him. In that same farewell address Benedict XVI promised the Cardinals that he would be one in prayer with them that they might be “fully accepting of the action of the Holy Spirit in the election of the new pope.”

So all is silent as crowds gather to stare at the smokeless chimney which rises from a roof far above Saint Peter’s Square. And as it has two hundred and sixty five times before, the world waits to hear the words “Habemus Papam” with no idea what surpises God may have in store.