Standing at the Foot of the Cross 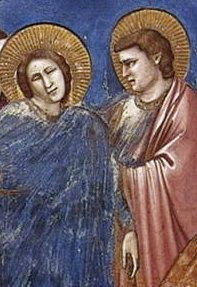 They all left him, except for two.  And maybe that hurt even more than the nails and thorns.

Remember Peter’s words, “even if everyone should desert you, I would never run away!”?  Neither hide nor hair of him.  And what of his brother Andrew, or James?  Surely the ones who Jesus always kept close to him on the Mount of transfiguration and in the Garden would be there?  But no James.  And no Lazarus.  And no Martha either.

Only two stand at the foot of the cross: Mary and John, the mother and the youngest of the Apostles.

Mary, who loved Jesus with a mother’s love, and the devotion of a disciple.  From the very beginning she said “yes” to the Angel Gabriel in total acceptance of God’s will.  And that love was not just for a time, but for all time, even unto death.

Mary’s faithfulness was not without cost…late medieval depictions of the crucifixion always include the “woman of sorrows” collapsing to the ground in mortal grief.  But her love was learned from the heart of her child: a love which was faithful even in sorrow and desperate grief.

And beside her stood young John: the Beloved Disciple, the one whom Jesus loved.  He is the innocent, the one to whom they all went when they wanted to know what Jesus was really thinking.  With Peter and James, he formed the inner circle.  He was the one who last night fell asleep on the Master’s shoulder because the supper lasted so late into the night.

The youngest Apostle is our stand-in at the foot of the cross, catching the grief stricken body of the Virgin in his arms, all the while seeking to be sustained by her unwavering faith.  The young John is us.

Thus does Jesus look down from the altar of the cross and say to his Blessed Mother: “Woman, there is your Son,” and to us: “There is your mother.”

And from that moment she, the Mother of Sorrows, is not only the Mother of Christ, but our Mother as well.  As she stands at the foot of the cross, so she will stand beside us in our agonies and our sorrows: consoling, interceding and weeping for us, ever seeking to unite our sufferings to the Blessed Passion of her Son upon the Cross.

With Mary and John and all the world let us acclaim: Come, Let us Adore!