Saint Joseph, Saint Francis and the Bishop of Rome 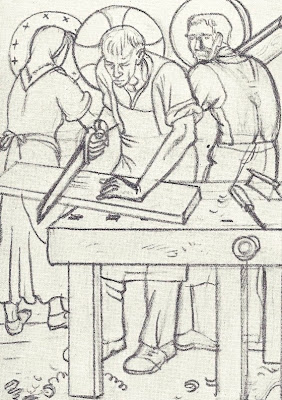 Forty three years ago, by the decree Quaemadmodum Deus, on the feast of the Immaculate Conception, Pope Pius IX declared St. Joseph to be patron of the universal church.

And this morning, our Holy Father Francis, assumes the chair of Peter and inaugurates his Petrine ministry as Bishop of Rome, Vicar of Christ, and Chief Shepherd of that same universal church.

Saint Joseph is our patron by his example, reinvigorating the life of the Church “with true evangelical virtues."1

When an angel comes to him in a dream and tells him the will of God, “receptive to God’s plans and not simply to his own.”2
He is our patron when he protects us, “...in the same way that he once kept unceasing holy watch over the family of Nazareth, so now does he protect and defend with his heavenly patronage the Church of Christ."4

Picture this holy patriarch cradling the Christ child in his arms as Mary sleeps, sheltering mother and child on the flight into Egypt, and in the home at Nazareth.

Picture good St. Joseph, still interceding with his Son for the beseiged Church of Pius IX, and the church of Francis the first, for “in every period of history there are Herods who plot death and destruction.”5

Up until recently, except for Padre Pio, St. Joseph was the most popular saint in Italy, although St. Francis of Assisi always gave him a good run for his money.

That’s because St. Joseph is the accessible saint, the quiet father in the background, the good man, achieving sanctity not through mighty deeds but, through “a life lived in the greatness of every day life, but with steadfast faith in Providence.”

He is the one described by Dei Verbum, who “hearing the word of God with reverence”6 manifests “an absolute readiness to serve faithfully God's salvific will.”7

Which is why I suspect the patriarch and the poverello are smiling down on the brand new pontiff today, who styles himself, much like them, as no big thing, just a good and Holy Father, who wants to keep us safe.